Poems in a time of grief

- Order at your Favorite Local Bookstore! 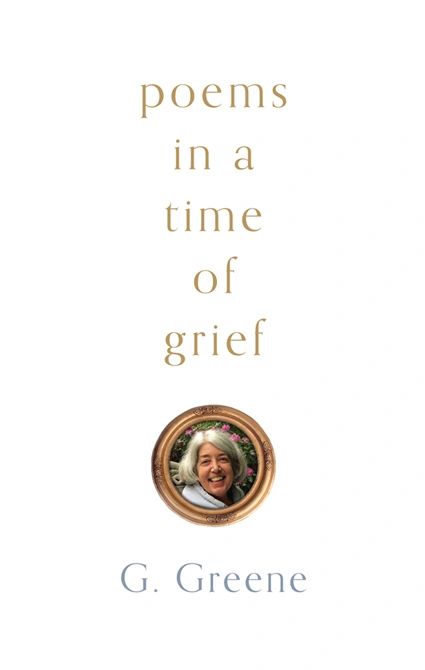 Poems In a Time of Grief is a book for those grieving a personal loss, by someone who was, and is, grieving. The hope is that these poems help you give voice to your pain, as I've given voice to mine.

The grieving often feel alone in their grief.

Poems In A Time of Grief is here to say,

More about poems in a time of grief

This isn’t a book written for lovers of poetry, though they may find something for themselves here as well.

This is a book of poetry written for those grieving a personal loss, by someone who was and is grieving. In my case, my grief is for my wife, my partner and love for several decades before she was taken by a devastating autoimmune neurological disease that remained undiagnosed and virtually untreatable.

(To view some samples of my work, click the 'Shop Now' link above. That will take you to my BookBaby store page. Click the lower right corner of the cover image, and you'll be able to read 10 pages of the book.)

A  little about me:

I’ve always enjoyed writing, but my focus prior to my wife’s passing, at least in terms of poetry, was typically satire, song parodies, and the like, or the occasional humorous birthday poem for friends. I had always aspired to write a book – I just wish this wasn't it.

I’d really never written a word of 'serious' poetry, whatever definition one chooses to use for that, until several months after my wife’s death. In an early visit with a grief therapist, they described my situation as living in a world of wrong, which sparked the first poem simply because I thought it an apt description of my circumstance. So I wrote and edited “World of Wrong,” then gave it no more thought.

This volume began its gestation in earnest when I ignored my therapist’s advice to have a plan in place for the first significant holiday I’d be spending alone after my wife died, which, in my case, happened to be Memorial Day 2019. I thought, “Well, that was never a significant holiday for us, so I’ll be fine.” So, with no plan in place I quite predictably ended up the furthest thing from fine that very, very long weekend. In the accompanying emotional turmoil, the very first poem borne of pain came out in a surprised rush over the holiday weekend.

Once the figurative emotional dam had been breached, the rest of these poems followed, sometimes several a week, sometimes just one over several weeks. The act of writing them became an integral part of my grieving process as well as a way to communicate to friends and family how I was feeling long beyond the point in time where such conversations might have been  comfortable for anyone involved, myself included.

As the poems piled up, it was suggested to me that, assembled into a slim volume, they might provide some relief, or release, or comfort to others in similar circumstances, whether grieving a spouse, parent, sibling, child, friend or lover – anyone trying to cope with grief due to the loss of a loved one.

So the idea was born to assemble enough pieces to fill a small volume and put them out in the world as expressions of grief in poetic form that might provide some insight or respite for others, even if only to say that there’s someone out here who has perhaps shared some of the same feelings and reactions the reader might be going through.

I’ve tried simply to express my grief and work through my subsequent depression, using poetry as the form, and offer it to the reader in the hope that it might proffer a moment’s catharsis for people in similar circumstances. If a reader were to feel a little less alone in their grief because of something they read here, that would be very humbling and gratifying to me – and I'd love it if you'd consider sharing your reactions with me.

In the end, I’ve said what I needed to say through my writing. As for everything else, I’ll let the poems speak for themselves, for me, and for my beloved , accomplished and brilliant wife, Jean.

My wife, Jean, in her kayak